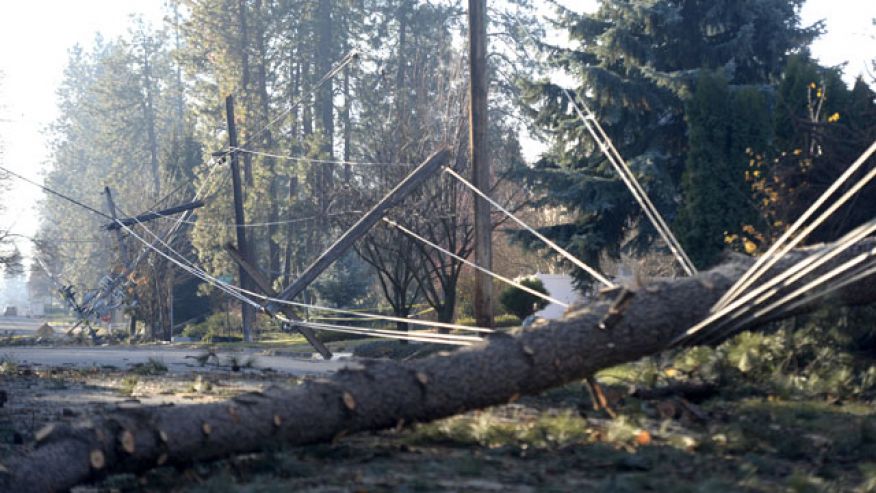 The windstorm that blew through Spokane two weeks ago is something we’ll always remember—whether we want to or not.

The whole thing was such a blur…in many ways. I was in a 2 o’clock meeting with our Worship Committee, going over things for Advent and Christmas. The winds were picking up outside, but I didn’t pay much attention (who notices the wind?). Then things started to get hairy.

One person in the meeting mentioned that she had just received three rapid-fire text messages—from three different people—insisting that she head home ASAP. While I was concernedly pondering why that might be, the power went out. Then, a moment later, my office manager, Kim, came to tell me that my wife was on the phone.

One of the towering Ponderosa Pines in our front yard had split in two and fallen on our house. Oh, and the dog took off.*

My thought in that moment was, as folks used to say, “What in the Sam Hill is going on around here?”

What does this mean?

That Lutheran question has been coming to mind lately. Now that power and heat have been restored and the South Hill is beginning to look less like a war zone, I have been doing some reflecting on the whole thing—and, in particular, about the morning of November 22nd.

That was Sunday. The power was still out at church. Temperatures had dipped below 40 degrees, and we had begun running a few taps to guard against frozen pipes. Some had asked me in the days preceding if we might cancel worship.

Cancel worship? I thought. Not a chance. This may be one of the best days of worship ever.

Memorable it most certainly was. Between our two services nearly one hundred hardy souls turned out, squeezing together in the front pews in a manner most remarkable for Lutherans. Some hooked arms. Others brought little hot pads, like quarterbacks have in their hand warmers. One intrepid youth showed up in shorts and a t-shirt.

Did I mention it was 35 degrees in there?

But we all loved it. God’s presence was not hindered for want of heat. The hymns were sung with greater gusto, the liturgy with (in my opinion) deeper reverence. It’s as though the chaos without brought greater clarity within.

What was most important, what really mattered, was made plain. Jesus is still risen. The Sacrament still avails. Where two or three gathered, the Lord still shows up.

I do not hope that another windstorm comes again any time soon.

Some lost homes, a few even lost their lives. It was a colossal headache in countless ways, and my family—like many—is still picking up the pieces. I’ll be okay if it takes another 19 years for such a storm to blow through town.

But being without power was not altogether awful. For it was a spectacular reminder that God’s power is made perfect in our powerlessness. And Lord knows there was plenty of that.

*Not to worry: a neighbor nabbed her and Juno was returned safely home.

We are moving to one service at 9:00am for the coming months. Thank you for joining us for worship today! To download a bulletin to go along with this service, please visit our website here: www.beautifulsaviorspokane.org/2022/07/03/july-3rd-fourth-sunday-after-pentecost/ (Friendly reminder that the volume on Facebook does not automatically turn on. So please remember to check that there is no "x" next to the volume icon on the video and that your computer audio is also on.) Sermon with Reverend Shaun AdamsThank you Floyd Czoski and Julia Staben for the music this morning! ... See MoreSee Less