Read Part 1 in this series

If people know anything about the 12 Days of Christmas, it’s probably the annoying song.

The carol is filled with enough strange characters to make for the most off-the-wall vaudeville performance you’ve never seen: 10 leaping lords and 8 milk-maids and 5 gold rings and…what is this all about? Is it just some whimsical, silly song for the season?

Perhaps. But one story about the song—unverified by this author but plausible and attractive enough—suggests that it originated as a tool for teaching the faith.

“My true love” is the One whose name is Love; “me” is you or I or whoever is singing the song. In this way, “The Twelve Days of Christmas” is similar to the Small Catechism, which applies basic doctrines of the faith to the individual believer (“I believe that God has made me together with all creatures…”).

So let’s go with it—this isn’t canonical. Without further ado, I give you one (reasonably plausible) interpretation of the Twelve Days of Christmas:

A partridge in a pear tree = One beloved Son

The “first day of Christmas” is Christmas Day itself, and so fitting that our Lord Jesus would get top billing. For “my true Love” so loved the world that He gave His one and only Son…The “pear tree” might refer to the tree of the Cross (cf. Galatians 3.13).

Both parts of Scripture have a common Author in the Holy Spirit, traditionally depicted (drawing from Matthew 3.16 and elsewhere) as a dove. (Honorable mention: Two natures in Christ, human and divine)

These three (from 1 Corinthians 13) are called the “theological virtues,” which are peculiar to Christians, as distinguished from the “cardinal virtues,” which are native to all men. Similarly, the significance of the three hens being French is that they are foreign. (Honorable mention: 3 person of the Trinity; 3 gifts of the Magi)

The writers of the Gospels were the first to call out to the ends of the earth that “your God reigns!” (Isaiah 52.7). (Honorable mention: 4 “corners” of the earth; 4 points on the cross)

The “five books of Moses” are like the Gospels of the Old Testament, and their contents echo throughout the New Testament. In particular…

6 Geese-a-Laying = the days of creation.

Creation is “very good,” but groaning in the pains of childbirth—like a woman (or a goose?) in labor—until the renewed creation is brought forth in full.

7 Swans-a-Swimming = 7-fold gifts of the Spirit.

Enumerated in Isaiah 11, these gifts—which all rest upon our singular “Partridge”—are wisdom, understanding, counsel, fortitude, knowledge, and the fear-of-the-Lord (plus the Spirit himself). See also Revelation 1.4, which refers to the “seven spirits” before God’s throne. (Honorable mention: any of the many other 7s of Scripture) 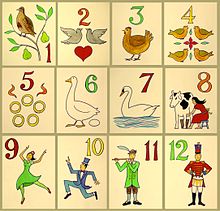 9 Ladies Dancing = fruits of the Spirit.

What gets God’s people moving, like a group of gals doing the rumba, are love, joy, peace, patience, kindness, generosity, faithfulness, gentleness, and self-control (Galatians 5).

All people—even all “lords,” kings, and masters—are accountable to God’s Law, the 10 Commandments (Romans 3.19-21). They keep everyone without distinction “leaping” to follow God’s will. (Honorable mention: 10 plagues; 10 percent—that is, a tithe)

After Judas betrayed Jesus and subsequently came to his ignominious demise, only eleven apostles remained. It is they who traversed the earth to make known the sweet message of the gospel to the world, like pipers making music from town to town.

12 Drummers Drumming = the teachings of the Apostles Creed.

Luther was somewhat novel in dividing the Creed into three articles that corresponded to Father, Son, and Holy Spirit. Throughout the Middle Ages, the conventional teaching was that the Creed that drew its name from the group of twelve apostles also taught twelve doctrines.

You may be totally unpersuaded by these rather whimsical interpretations, which is fine.

Your true Love is always giving, after all.

Coming Tuesday: how to keep the 12 Days in your home.

Worship With Us - Schedule