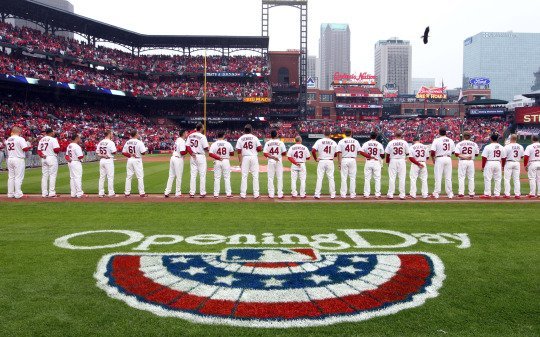 The old is passed—behold, new things have come!

Am I talking about Easter? Perhaps—or Opening Day of the baseball season. Before I’m accused of blasphemy, I don’t mean to ascribe any kind of supernatural significance to the old ball game (though at least one author calls baseball “the perfect game, the very Platonic ideal of organized sport, the ‘moving image of eternity’ in athleticis”).

Rather, I find it felicitous that these two occasions for reflecting on rebirth happen to intersect: this year they were a couple of weeks apart, but other years it’s the same day.

How many other days of the year are people permitted—yea, encouraged—to play hooky from work or school? On Good Friday? Don’t count on it.

Not even the football season commands such devotion for its first games. The President throws out the first pitch, the color guard waves the flag, some pop star sings “God Bless America,” even an eagle flies overhead (see the picture above). There’s at least as much ritual as in a worship service.

And as I alluded to, the rhetoric surrounding Opening Day is downright mystical. As John Fogerty puts it in his great song, “Centerfield”: “The sun came out today, we’re born again, there’s new grass on the field.”

Listen to an overjoyed Cubs fan talk about the start of the season; you could be excused for thinking he underwent a religious conversion after last season’s victory. Something about the first of 162 games brings out the optimist even in those with altogether empty glasses.

But I don’t mention any of this to ridicule baseball or its fans.

I count myself among the most ardent. I simply delight in the coincidence of calendar—particularly as I begin to think about the significance of Jesus’ resurrection.

Opening Day is so appealing because of that sense that anything could happen, that a new day has dawned. Truly that is the case with the empty tomb.

By His dying and rising, Jesus wiped the slate clean of our sin, like an umpire dusting the dirt off home plate. He reset our heavenly scorecard—or, more accurately, He gave our wicked opponent a woodshed beating. (You think the Yankees are evil.)

The Collect (or Prayer of the Day) for Easter put it beautifully. “Almighty God, through Your only-begotten Son, Jesus Christ, You overcame death and opened to us the gate of everlasting life…”

Easter is the true “Opening Day.” Christ has ushered us into a new season in our relationship with God. Where before the turnstiles to Paradise stood locked, He has now given us entrance and access for eternity. It’s a whole new ballgame with our Lord Jesus.

So enjoy some peanuts and cracker jacks, why don’t you? Because the true Opening Day has come, and I like our chances now, and forever.